Home » Cryptozoology » What is a Jackalope?

What is a Jackalope? 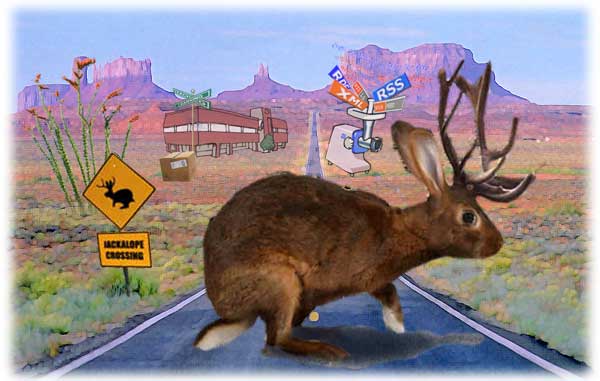 What is a Jackalope? The jackalope is a mythical creature of North American folklore that looks like a jackrabbit with antelope horns. Indeed, the term was derived from these features, jackalope being a portmanteau of jackrabbit and antelope. What is a Jackalope? It is particularly popular in Douglas, Wyoming, in due part as a hoax perpetuated by two brothers in the 1930s.

The Origin of the Jackalope

Douglas and Ralph Herrick were two brothers who enjoyed hunting in the woods of Wyoming. As teenagers, they also took taxidermy lessons, which they put to good use one evening after getting home late from a hunt.

As the story goes, the brothers returned to their shop and hastily flung a jackrabbit carcass onto the table in their haste to eat. However, the carcass slid down directly below a pair of deer antlers. The image must have stuck, for they then decided to mount the carcass the way it was, grafting the antlers onto it. Thus they “created” the first ever jackalope.

They sold the first jackalope to a hotel owner named Roy Ball, earning $10 for their troubles. This was roughly equivalent to today’s $186, which is an impressive sum. Ball displayed this creature in the lobby of his LaBonte Hotel in Douglas, where it attracted a fair amount of attention.

Soon enough, the Herrick brothers received a lot of demand for the strangely popular jackalope mounts. Hotel, bars, and tourist shop owners reached out to them to get jackalope heads. The Herrick brothers could barely keep up as the popularity of the product soared. When they sold their thousandth jackalope head, Douglas decided to call it quits, and Ralph picked up the business on his own.

Ralph had virtually no competition, and to this day, only one other shop produces this unique tourist item. The jackalope became so popular that Wyoming then declared itself the Jackalope Capital of the World back in the 1940s. The title has since been used in tourist brochures and ads and even postcards. A statue was even erected in Douglas, and the place was called Jackalope Square. Every year in June, the city celebrates Jackalope Day.

A Myth with a Life of Its Own

There are some who staunchly believe that the jackalope is real, and that the Herrick brothers had nothing to do with it.

According to legend, the jackalope is a cross of the now-extinct pygmy deer and a type of killer rabbit. It is one of the rarest creatures in the world, so very few humans ever saw it. Most of the sightings are in the American West, particularly in Wyoming (no surprise there), Nebraska, and Colorado. The first jackalope encounter was said to be by John Colter, who was one of the early settlers in today’s State of Wyoming.

The antlered rabbit has brownish fur and is fairly large, larger than the average jackrabbit. It is also said to be aggressive and incredibly dangerous, able to move in speeds of up to 90 miles per hour. Despite having the ability to flee quickly, however, the jackalope prefers to fight head on. They are vicious and powerful, and thus they are also called “warrior rabbits.”

As with any mythical cryptids, there is something magical about the jackalope: its milk is said to have medicinal properties. According to legend, the milk of a female jackalope is extremely valuable and could cure most illness, sort of like the tears of a phoenix or unicorn blood. However, since jackalopes are nigh impossible to catch, even the biggest believers would be hard-pressed to support this claim.

If that isn’t enough, jackalopes are also said to be able to speak, sing, and even mimic human voices. They use this ability to elude capture, and sometimes, they even use it scare cowboys gathering around a campfire.

The jackalope also has cousins in Europe: there is a similar creature called the wolpertinger in Bavaria, appearing in its Medieval and Renaissance folklore. The wolpertinger is said to have not only antlers but also fangs and wings. In Sweden, meanwhile, there is the skvader, which has the front of a jackrabbit and the back of a wood grouse.

Horned rabbits have been mentioned in European stories as far back as the 1500s, though it was only in 1800s that sightings of such creatures were recorded.

As a Literary Motif

It is not so surprising that the legend of the jackalope persists to this day. Aside from the townspeople actively advertising their town as its home, there’s also something to be said about “hunting mythical creatures” as a recurrent theme in local legends. There’s Bigfoot in California, the Beast of Busco in Indiana, the Silver Lake Sea Serpent in New York, and the White River Monster in Arkansas, among others. There’s also the globally-known Loch Ness Monster in Scotland.