Zombie Apocalypse: So What Are We Up Against? 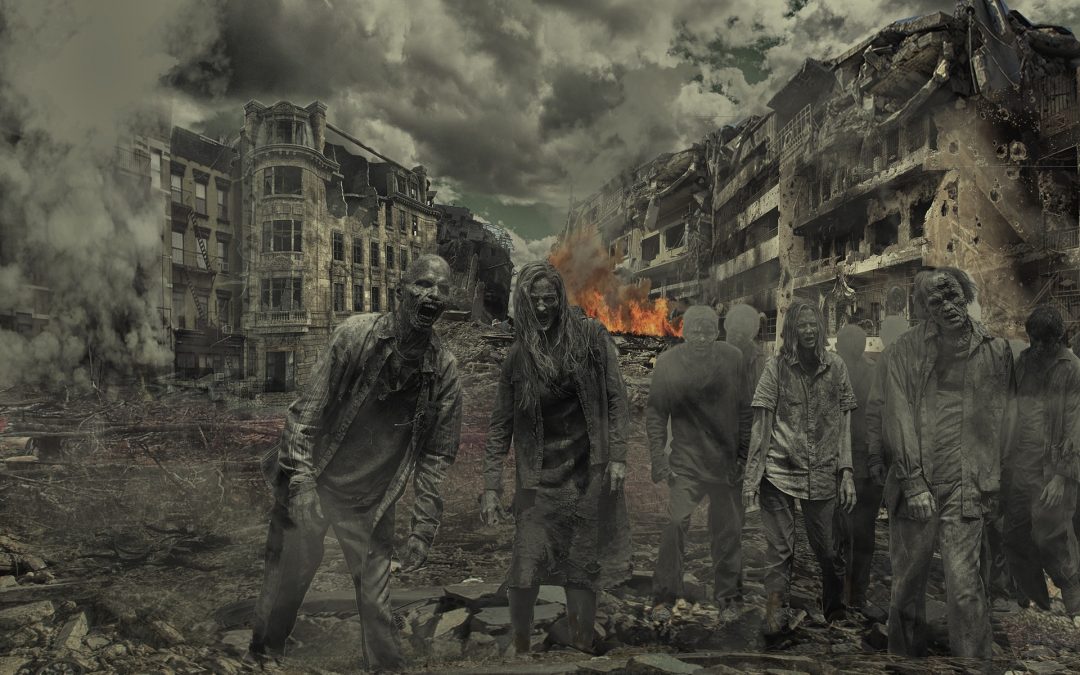 When it comes to zombie apocalypse, as much as I hate to say it, everything that follows in this chapter is all technically “speculation” on my part. I’m not going to tell you that I have a friend who has a friend who has a brother-in-law who knows a guy who might work for a government think tank with initials nobody can figure out. Because even if that were true, which it is, you wouldn’t believe me.

So, let’s just pretend that everything we currently know is Hollywood’s version of fictional portrayals of zombie apocalypse that actually go back to the freaking Epic of Gilgamesh in 2500 BC — because nothing we’ve been talking about for that long could possibly have a shred of truth to it.

Okay. Now. For you people who are struggling with the math? That works out to 4,514 years. And for those of you who are going “Gilga-who?” It’s the story Picard told Dathon in the “Darmok” episode of TNG. (If you’re not a Trekkie, but you actually passed high school English, it’s also an epic poem from ancient Mesopotamia.)

That’s right, folks. References to the re-animated dead go back more than 4,500 years. Some screenwriter in Hollywood did not make the whole thing up no matter how much you want to believe that’s the truth. Denial might be comforting, but it won’t get you where you need to be in this situation.

Even going with the movie version of what a zombie is going to be like, it’s all a matter of picking your poison by this year’s hunkie movie star du jour. The zombie apocalypse trying to take Brad Pitt down in World War Z were some pretty vicious, fast-moving antagonists because a dude like Brad can’t be taking on the wimpy undead. It’s just not a manly man thing, and Angelina wouldn’t like it.

Go rent the 1968 George A. Romero classic, Night of the Living Dead and you’ll find slow, stupid, lumbering zombies that are dangerous because there’s so many of them and they’re so mindlessly relentless.

Sit through several seasons of The Walking Dead on AMC and you’ll come to the conclusion that:

(1) zombies are always where you least expect them

(2) Rick really needs to get a Glock

Sorry, couldn’t help myself. Moving on.

Where is the real zombie apocalypse gonna land in the middle of all of those competing interpretations of what a zombie is and what it can and can’t do?

I already touched on this a little in the section on “Why Is This Happening to Me?” One thing I do think is a given. When the zombie apocalypse does begin, it’ll spread like wildfire around the world in a very short period of time. Containment won’t be possible, in part because the proliferation of the disease will be exponential. We’re not talking epidemic. This will be a pandemic.

Every victim of a zombie attack becomes a zombie. I’m sure some pointy-headed math teacher could work a progression equation for us — in fact, they have, but I’m not supposed to know that — but I can give you the short answer.

And this is not a matter of just waiting around for the undead to rot themselves into uselessness. Don’t buy the “I’ll just say indoors until it’s over” line of reasoning.

Best estimates suggest that every single zombie has a “lifespan” of 3-5 years before they get too mushy, tattered, and just plain nasty to continue to pose a danger to the living.

Here’s what I think we can know about the apocalypse and zombies in broad strokes:

All the studies I couldn’t possibly have read suggest that zombies have slow and shambling physical movements because their nervous systems no longer function correctly. Their nerves short-circuit every few seconds.

This looping malfunction makes the zombie’s physical motions halting and uncoordinated. Think of them like a flickering light bulb. It keeps trying to go out, but it never quite gets there.

Not to mention the fact that zombies take the idea of muscle atrophy to whole new levels. Even though they seem to keep moving until they look like dried out pieces of beef jerky, zombies still suffer from greatly decreased muscle mass.

Don’t convince yourself for a minute that a zombie can’t be strong, but they can be overpowered if you keep your cool because no matter what Hollywood tells you, they’re not fast on their feet and their reflexes are awful. Get over your initial revulsion and stay away from those snapping jaws and you can dance circles around one of these things.

Here’s another popular myth a lot of people latch on to. “Oh, if the zombie apocalypse hits, I’ll just find me an island somewhere and I’ll be perfectly safe.” Okay. Work with me here. They’re dead. Dead people don’t breathe. Therefore, dead people can’t drown. Come on. Do the math with me here.

Zombies don’t have to swim. They can just walk in the lake and eventually walk out on the other side. They’re not going to be strong enough to fight a good current, so getting washed downstream is likely, but sooner or later, they’ll either get out in shallow water, or just get snagged on something on the bottom and gurgle while the fish have fun with them.

Never assume that any body of water, including shallow offshore ocean water, isn’t also zombie infested. I wouldn’t be going for any swims in murky pools if I were you, and do not be drinking that stuff without excellent purification — like boiling — unless you’re just hankering for a heaping helping of Cream of Zombie Soup. (More on water purification later.)

The undead can see and they track movement with their eyes, but primarily a zombie is drawn to sound. If nothing is going on around them, they kind of just stand there and rot quietly. Unless something attracts their attention and triggers their hunger, they have no motivation to do anything. All of these qualities can be used to your strategic advantage.